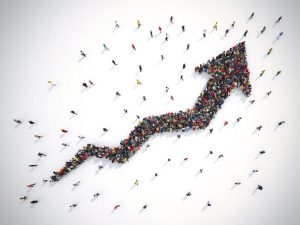 The UK economy showed signs of resilience during the final quarter of 2017 recording a higher than expected rate of growth, although Brexit concerns still weigh on economic prospects.

Official data released by the Office for National Statistics (ONS) suggests that gross domestic product (GDP) rose by 0.5% in the three months to December 2017. This preliminary fourth quarter estimate was higher than the 0.4% growth rate recorded during the preceding quarter, and 0.1% above the consensus forecast among City economists.

The dominant services sector, which accounts for around 80% of UK economic output, was the main driver of growth in the fourth quarter, expanding by 0.6%. However, despite this growth in the final quarter, the data did show a weakening when compared with the same quarter a year earlier, particularly in relation to more domestic consumer-facing sectors, such as distribution, hotels, catering, transport and communications.

Indeed, the ONS described the broader picture as one of “slower and more uneven” growth. Across the whole of last year GDP grew by 1.8%, down slightly on the 1.9% rate recorded during 2016 and the lowest annual growth figure since 2012.

The latest growth figures did certainly exceed market expectations and, in doing so, provided ammunition for those commentators who argue there is little sign of the Brexit-induced disaster scenario that many predicted. However, the data does still paint a relatively weak picture of the UK economy which grew at a slower rate during 2017 than other major economic nations.

In addition Bank of England Governor, Mark Carney, has reiterated his assertion that Brexit has already cost the economy tens of billions of pounds in lower economic growth. He also stressed that greater clarity about the country’s future relationship with the EU was required if the economy is to start growing more quickly. 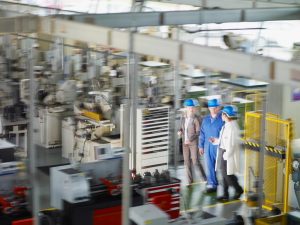 The UK manufacturing sector is growing at its fastest rate since early 2008, boosted by a potent combination of strong global economic growth and the weaker pound.

Official data published by the ONS showed that manufacturing output in the three months to November 2017 was 3.9% higher than in the same period a year earlier. The sector, which in total accounts for around a tenth of all UK economic output, also recorded a seventh successive month of expansion in November, the longest unbroken run of manufacturing growth in more than 20 years.

ONS statistician, Ole Black, commented: “There was strong and widespread growth across manufacturing, with notable increases from renewable energy projects, boats, planes and cars for export.”

This strong expansion in manufacturing output has been driven by two major economic trends: sterling’s post-Brexit depreciation and the robust performance from the three main engines of global economic growth – the US, China and Europe. This has resulted in a significant boost to global demand at a time when UK exports are particularly competitive.

However, while the manufacturing sector is currently thriving, Brexit-related uncertainties and the more subdued nature of the UK domestic economy has left the construction industry enduring its toughest period for more than five years. Construction output in the three months to November 2017 actually contracted by 2% compared with the previous three-month period. This was the sector’s largest quarterly decline since August 2012, with the only bright spot being new housing construction, which recorded a 1.2% increase in output. 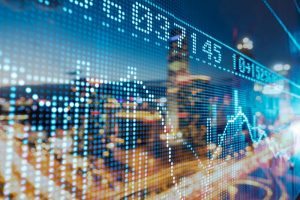 As the first month of 2018 drew to a close and the World Economic Forum concluded in Davos, the focus shifted firmly onto the US, as markets braced themselves for President Trump’s first State of the Union address to Congress on 30 Jan, and Janet Yellen’s last Fed meeting as Chair.

Relieved by the measured tone of the President’s address and the decision to leave its benchmark interest rate unchanged, US stocks clawed back most of the week’s earlier losses. The Dow Jones closed the month on 26,149.39, an increase of 5.79% over the month and the NASDAQ index closed January on 7,411.48, an impressive monthly gain of 7.36%.

In the UK, stocks struggled to find direction at the end of the month, following a stronger performance earlier on in January, with a closing high of 7,778.64 on 12 Jan for the FTSE100. The blue chip index, which has been hitting record highs over the past weeks, fell to a five week low to end the month on 7,533.55, a monthly fall of 2.01%, dragged lower by financials, housebuilders and commodities. A profit warning issued by mid-cap outsourcing company Capita at the end of January and Carillion’s collapse earlier in the month also weighed heavily. The FTSE250 followed suit, closing 2.33% lower over the month at 20,243.60. The junior AIM market managed a monthly gain of 1.85% to close at 1,069.00.

Gold gained 3.24% in the month to end at $1,344.76 a Troy ounce, the precious metal has gained over recent weeks, there has clearly been an underlying risk-off move. The oil markets rose 2.13% in the month to close out at $68.03 a barrel, as measured by the Brent Crude benchmark.

Tough times for the retail sector

Retail sales in December fell at a sharper than expected rate as UK consumers struggled to cope with rising prices and stagnant wages.

Official data showed that retail sales volumes in December were 1.5% lower than the previous month. This was a much sharper decline than economists had been predicting and marked the largest month-on-month drop since June 2016.

This decline in sales volumes partly reflects changes in Christmas spending patterns, with many shoppers shifting their purchases to November in order to take full advantage of Black Friday offers. However, it also clearly demonstrates the erosion in consumer spending power that has been evident over the course of the last year.

Consumers have been hit by a combination of higher prices and stubbornly weak pay growth which has effectively squeezed people’s spending. This point is further highlighted by the retail sales figure for the whole of 2017, with the quantity bought increasing by just 1.9%, the lowest annual rate of growth since 2013.

Furthermore, the latest monthly survey published by the Confederation of British Industry (CBI) suggests that this weakness continued into 2018. The CBI Distributive Trades Survey showed that 33% of retailers said their sales volumes were higher in January than a year earlier compared with 21% who said they were lower. This gave a balance of just +12 in January, down from +20 in December, and the weakest figure compared to seasonal norms in over four years.

CBI Head of Economic Intelligence Anna Leach confirmed that these are difficult times for retailers commenting that: “Household spending will remain under pressure this year from higher inflation and low wage growth, which will continue to weigh on sales growth in the retail sector.”

The pace of job creation in the UK quickened during the autumn months, with the total number of people in work rising to a new record high.

Data from the official labour market statistics published in January showed that the number of people in work rose by 102,000 during the three months to November 2017, taking total employment to a new record level of 32.2 million. These figures were much stronger than expected and alleviated fears that the labour market may have been running out of steam following two months in which employment levels had dipped slightly.

In spite of this increase, however, the growth in wages is still clearly failing to keep up with the rise in prices – in real terms (adjusted for consumer price inflation), average earnings were actually 0.5% lower in the three months to November compared to the same period a year earlier.

Although real wage growth may still be negative, the data does clearly show that the labour market remains tight and this has led to some suggestions that the Bank of England may consider raising interest rates as early as the spring. However, while policymakers will continue to watch the labour market closely, the consensus amongst many economists remains that the next interest rate hike is likely to be towards the end of 2018 at the earliest.

Information within this document is based on our current understanding and can be subject to change without notice and the accuracy and completeness of the information cannot be guaranteed. It does not provide individual tailored investment advice and is for guidance only. Some rules may vary in different parts of the UK. We cannot assume legal liability for any errors or omissions it might contain. Levels and bases of, and reliefs from, taxation are those currently applying or proposed and are subject to change; their value depends on the individual circumstances of the investor. No part of this document may be reproduced in any manner without prior permission.